The best part of the trip was going on the Safari where we saw, wild horses, tall giraffes, zebras and two fat rhinos! Because it was a sunny day we got to see the baby hippo and her mum sunbake on the bank of “Hippo Beach. We also had a dance in the African village.

This is the second trip during school holidays our unit has done, so on the way home we started to think of more places Marlee & Naya can take us to visit next school holidays!

So far it’s a toss-up between the Museum and Science works! What do you think we should do?

1st Tyabb Birra-Li Guides have been very busy this term, participating in the letter ‘A’ night, decorating biscuits, entertaining their Mum’s at Mother’s night and working towards their ‘Pet Badge.’ Peninsula Cat Rescue and a local Vet were invited to talk about pet care. The girls completed a service project by collecting cat/kitten food, toys and making polar fleece blankets which were then donated to these two services in the community.                                                Unit Leader, Snowy Owl [Angela]  Certificate

Dear Blue Dolphin, We have learned what to give our pets. The vet showed us how to listen to the heart. We made special blankets for the cat rescue and the vet. For Mother’s Day we played fruit salad and made her a cup of tea and a biscuit. Annabel

Dear Blue Dolphin, These past few weeks we have been working on our pet badge. We have had the Hastings Vet come in to talk to us about pets and how to take care of them. She brought in her dog “Lilo” and we got to listen to her heart. We made blankets for the Peninsula Cat Rescue. They brought the cutest kittens called mikey, angel, buff and spike. Brydie

To Blue Dolphin, This term at Girl Guides we have made a card for mother’s day, craft and we worked to get the Pet Badge. We saw a vet’s puppy and it’s name was Lilo and we did Letter night. The letter was A and I dressed up as a zebra. We did a march for Anzac Day. I was holding the banner. Jordyn

At Girl Guides we did a letter night, we all chose “A.” I came as an owl because animals starts with A. One night some people from the cat rescue came and they brought little kittens, there were 4. We learnt a bit about what the cat rescue does, then we sat in a circle and the kittens were in the middle. We got to play with them and hold them, they were so cute. For mother’s day we made a place mat and a photo of us, we also wrote a letter. I wasn’t there on mother’s day because I went to camp. I love Guides. Amber 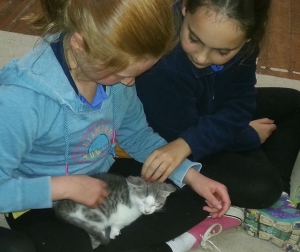 Dear Blue Dolphin, This term I [girl guides] have been doing lot’s of things like: pet badge [cat rescue and vet] and I wasn’t here for most of the time so I didn’t get to see some things. We also made blankets for the vet and cat rescue because we thought that it will be good for the pets/animals. We had lot’s of fun with them. When are you going to give the magazine out to girl guides. Eliza

Dear Blue Dolphin, I had a wonderful night when the cat rescue visited and the vet also came. And we had mother’s night and we played games and my cousin was also here. We made our mothers a cup of tea. Aliya

I brought my teddy to guides for teddy bears picnic. We made decorated biscuits with lollies. We all told everyone our teddies name and when we got them. I am going to enjoy eating my biscuits when I get home. Adele

We are having a teddy bears picnic at Guides. We are making decorated teddy bear biscuits with icing on top. I have M and M’s, marshmallows, sprinkles and other lollies on my teddy bear biscuit. Everyone got a Tory bear badge. Charlie

Dear Blue Dolphin, In Girl Guides the Peninsula Cat Rescue and the vet came to our hall. Also our Mum’s played games for mother’s night in the hall. When I come to guides I like to play with the hula hoops and skipping ropes. Aisling

To Blue Dolphin. At Girl Guides we did a letter night. The letter was A. I dressed up as a giraffe, it was really fun. We also had a Pet badge night and cat rescue came with kittens. They were so cute and they also brought in four kittens. A dog also came in, it’s name was Lee Loo, she was cute. We also had a mothers night. We played games and made our mums tea and gave them cookies and we made mother’s day craft for our mothers. We made a picture for our mums and it was really fun. I love going to Guides. Zaira

At Guides we got a Pet Badge. The Vet and Cat Rescue service came to our hall. On Mother’s day we played games. We did a letter night and the letter was A. I marched in the Anzac Day Parade. I like coming to Guides. Alex

Dear Blue Dolphin. This term in Guides we have been earning our Pet badge. We have seen the Vet and the Peninsula Cat Rescue. We learned where the heart is on a dog and learned how to listen to it. We had a play with four kittens and a cuddle. After that we fell in love with baby animal pictures and whenever we saw a baby animal picture we went “arh.” Maddie

Dear Blue Dolphin. We have been doing some stuff to earn our pet badge. The Peninsula Cat Rescue came, we got to pat kittens and the Vet came. We got to pat her dog and we talked and showed our pet photos. We had to do a mother’s night and we played games and we served them hot drinks. Sarah

Dear Blue Dolphin in Term Two. In girl guides we have been working on our girl guides badges. This term our focus is pet badges. We have been doing lots of different things. We played some games, the vet came to talk about pets and she brought her dog LeeLoo. Peninsula Cat Rescue came and they brought in some cute little kittens. We also had mother’s day. We made lots of things for our mums. On the day we shared a biscuit and a cup of tea. This term we have had a lot of fun. Evelyn

This site uses Akismet to reduce spam. Learn how your comment data is processed. 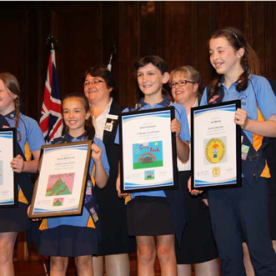